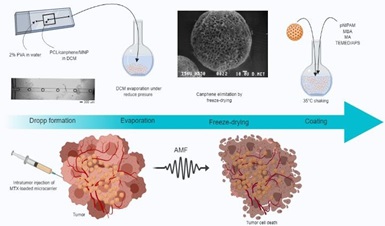 Luis F. Bravo-Duque has exposed interest for Pharmaceutical Technology, Physical Chemistry, Cancer Research, and Drug Delivery System research. He has collaborated in both, privet investment and academic institution, research projects to develop Drug Delivery Systems. One of them was the development and manufacture of an oral polymeric multiparticle system, for the release of a chronic use drug against obesity. Also, he was teacher assistant in the Pharmaceutical Technology Laboratory at the Faculty of Chemistry, where he supported in the realization of experimental practices, focused on the integration of knowledge of sterile liquid pharmaceutical forms and modified release systems. Currently he is studding a Science Master at the National Autonomous University of Mexico.

Multiparticle polymer systems (nano or micrometric) have gained great importance within the development of drug delivery systems (DDS), due to their great versatility and biocompatibility. Conventional manufacturing techniques are generally based on the formation of simple or multiple emulsions to use the drops as a template. The polymer particles prepared by these conventional methods exhibit a great variation between batch and batch in their physicochemical properties, such as average particle size, size distribution, surface charge and release profile. A manufacturing alternative is the miniaturization of the emulsification process by using microchannels to control the droplet size and their size distribution. The handling of fluids with microchannels is also called Microfluidics.

The aim of this project is developed a multifunctional system for a more efficient treatment of tumors, obtained with a robust manufacturing process to control the physicochemical properties of the particles and thus reduce the variation in the manufacturing batches. We have obtained a multiparticle polymeric system with magnetic properties for the treatment of tumors, manufactured with microfluidic devices. This system consists of magnetic iron oxide nanoparticles embedded in porous polymer microparticles of poly-ε-caprolactam (PCL) and coated with a temperature- sensitive co-polymer of poly-N-isopropylacrylamide (pNIPAM), N,N′-Methylenebisacrylamide (MBA) and methacrylc acid (MA). The polymer coat has a transition phase temperature around 43°C where the polymer collapse and the microparticle inside is exposed.

Sofía N. Casillas-Popova studied a Bachelor of Chemical Pharmaceutical Biology in the National Autonomous University of Mexico, now she is a master student in the Chemical Sciences Program of the National Autonomous University of Mexico. During the bachelor she studied the influence of gene transcription and protein translation in the prefrontal cortex and hippocampus in forgetting during consolidation and recovery of information in animals trained in the autoshaping task, through pharmacological manipulation. Now she is working on her master´s project, which involved the synthesis of magnetoelectric nanoparticles as new nanocarriers for the treatment of cancer

Statement of the Problem: In the recent years, pharmaceutical sciences have been quickly developed, so it´s easy to forget that no many years ago there weren´t available, effective and safety treatments for common diseases. Despite the advances in the pharmaceutical sciences, nowadays there are still inefficiently treated diseases that remain a challenge, therefore the development of new systems is crucial for the improvement of current therapies.

The coating of magnetoelectric nanoparticles with materials that respond dynamically to stimuli in the cellular environment provides a way to control the release of the drug inside the target cells.

The aim of this study is to design, elaborate and characterize magnetoelectric core-shell nanoparticles coated with a thermoresponsive polymer for their application in drug release and cellular nanoelectroporation.

Findings: The methodology employed in this study allowed the synthesis of the core-shell nanoparticles which now are subject of in vitro release studies.

Conclusion & Significance: This new nanocarriers promises to improve the treatment of diseases which remain a cause of premature death. In the case of cancer, they promise to overcome one of the main challenges, the delivery and specifically release of drugs into tumoral cells without effecting healthy cells.